Sikhism religion was founded by Guru Nanak Dev Ji around 15th century. This religion believes in the concept of one god and practices the teachings of his founders. The religion opposes the practice of caste system and does not believe in idol worship. Sikh Matrimony also follows the principles of Sikhism and the wedding takes place in a Gurudwara (a place of worship for the Sikh community). Weddings for the Sikh community members are solemnized in presence of the holy book, Guru Granth Sahib Ji.

The wedding ceremony for Sikh members is known as Anand Karaj, which means blissful union. The wedding usually happens during daytime. In the presence of the holy book, the groom and the bride takes vows to share responsibilities and duties as man and wife. After the end of the ceremony, both families organize a grand feast for family and friends.


The wedding rituals of a Sikh Matrimony begin a couple of days before the actual wedding day. Some common rituals are as follows:

Roka or Ceremony before the Engagement

Like all other Indian weddings, in the Sikh matrimony there are many rituals before the actual day of wedding. The first pre-wedding ritual is the ‘roka’. After fixing the match, the groom’s side visits the bride and a prayer meet is organized. In the end, the bride’s family offer gifts and sweets to the groom.

This is a fun-filled ceremony where the bride’s side organizes an evening of dance and fun. The family and friends sing Punjabi wedding songs to the tapping of dholak (Indian style drum). Young girls and boys perform on the latest chartbusters. 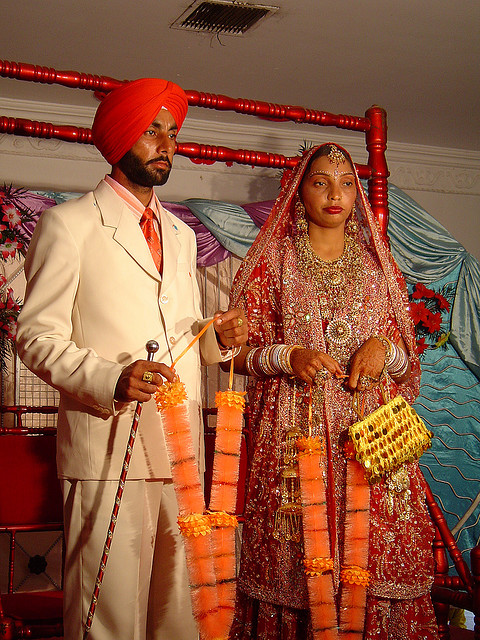 This is another fun ritual, which is mostly for the female members of the family. Mehendi artists are hired and intricate patterns are drawn on the hands and feet of the bride. Other female members also get their palms decorated and all present shares a hearty laugh. The bride leaves her mehendi to dry up to a few hours to get a deep red colour.

A small mehendi ceremony is also organized in the groom’s house. A small quantity of mehendi is smeared on his palms and this is quickly washed off.

A red thread on the left wrist of the bride is tied and items like iron key chain, cowrie shells and pearls are suspended from this. These items are considered auspicious in a Sikh Matrimony. A similar red thread without the above items is also tied on the right wrist of the groom.

In this ritual, which happens some days before the wedding, the bride is smeared with a scented powder of turmeric, barley flour and mustard oil.

In the morning of the wedding day, the sister is law of the groom along with other female member goes to nearby well to fill an earthen pitcher, known as gharoli. This water is stored for the groom for bathing.

This is another important ritual in a Sikh matrimony. The groom gets ready for his bath on the morning of wedding. He sits on a stool and four girls hold a cloth at four corners and cover his head.

Some more important rituals in a Sikh Matrimony are Ghodhi Chadhna, Milni Ceremony and Lawan Phere.