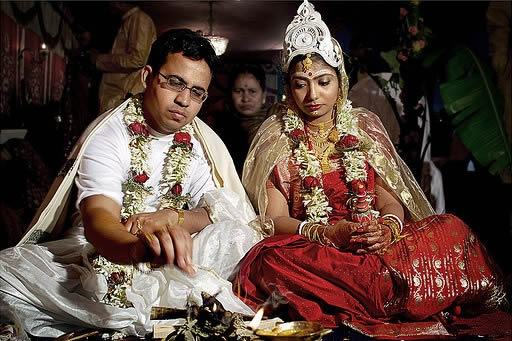 Hinduism does not allow marriage between bride and groom who belong to the same Gotra (lineage, link to ancestors). A priest (Purohit) is consulted for this purpose. In case the Gotra’s are not the same, the priest will visit the bride and groom and perform a ritual with an idol of Lord Narayana.

This is the engagement ceremony where elders of both families bless the couple with husked rice and trefoil. This is also an occasion for extended families on both sides to meet and exchange gifts.

This puja is carried out one day before the Bengali wedding where ancestors are remembered.

On the day of the wedding, seven married women put traditional red and white bangles (Shakha and Paula) on the hands of the bride and feed her curd and rice. Both the bride and groom bath in water that is provided by married women so that they too can have a long and happy married life.

Before the wedding, the bride and groom bath once again before putting on their wedding clothes.

The groom’s procession travels to the bride’s house for the wedding.

The Bor Jatri (groom and his entourage) are welcomed by the bride’s mother with a traditional earthen pot, trefoil and husked rice. Conch shells are blown. The Baran Dala is touched to the groom’s forehead, then the ground and once again to his forehead. The groom is escorted to the decorated Mandap (wedding canopy) where the wedding will take place. Usually the Mandap has two banana trees for prosperity and fertility.

When the groom is seated at the chadnatolla in the Mandap, he is offered new clothes.

The bride is not allowed to see her groom and she has to cover her eyes with betel leaves. The bride is seated on a Pidi/Piri (low wooden stool) and is carried by her brothers seven times around the groom. After this the bride can see her groom.

After the garlands are exchanged, the bride and groom can gaze lovingly into each others eyes.

The bride takes her place at the chadnatolla and her father gives her hand in her husband’s. Sacred thread are tied around their hands amongst the chanting of mantras (prayers). Their hands are placed on a brass glass which is covered with mango leaves and a coconut.

The bride and groom sit in front of a holy fire while the priest chants prayers.

Seven circles are made around the holy fire which signifies that they are now bound together for the next seven generations.

The bride and groom together offer puffed rice into the holy fire.

The groom puts sindoor in the middle parting in the bride’s hair. The bride covers her hair with her saree.

The bride’s family bid her farewell and the bride goes to the groom’s house.

Before entering her husband’s house, the bride dips her feet in a mixture of milk and red dye and leaves a mark on the floor of the house.

The bride and groom spend the first night separately so that they are refreshed for the ceremonies on the next day.

The day after the marriage, the new bride prepares food for her husband’s family. This is the occasion when the bride has her first meal in her husband’s house.

The next day the married couple revisits the site of their wedding and prays to the Sun God.

The marriage bed is adorned with flowers and the newly married couple can live as husband and wife.

This ceremony is conducted when the bride and groom visit the bride’s house for the first time after their marriage.