The Indus river that flows from the Indian Himalayas to Pakistan was also called the Sindhu. The area around the Indus which is South of Punjab and north of the Arabian Sea is Sindh and the people from this area are called Sindhis. After partition, Hindu Sindhis spread to all parts of India and the world.

The ceremonies, customs and rituals followed during a typical Sindhi marriage are influenced by vedic practices, Islam, Sikhism and Hinduism. 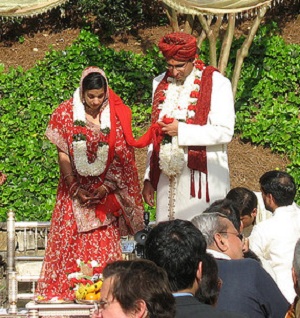 If a thread ceremony is not done during a male child’s adolescence, it can be done a day or two before his wedding. The priest (Mehraj) puts the Janya (sacred thread) and whispers prayers in the groom’s ears.

Kachchi means temporary. Kachchi Misri refers to an informal engagement. Sweets and gifts are distributed among the two families. The groom-to-be’s sisters put a red dupatta on their future sister-in-law’s head and feed her a sweet wheat halva. Ladki Rokna is another name for this ceremony.

This is the formal engagement. Like many important Hindu functions, the Pakki Mishri ceremony start off with a prayer to Lord Ganesha, the Hindu God of prosperity and good luck. Engagement rings are exchanged. The bride’s family offers 5 kgs of Mishri (sugar crystals) in a pot to the groom’s family. 7 married ladies make a Ganesha on the pot to bring good luck to the couple. Gifts are exchanged between the two families.

This Sindhi religious function is done 10 days before the wedding. Bhajan and satsang is held for Lord Jhulelal who is the God (Ishta Dev) of the Sindhi’s. Lord Jhulelal preached equality between Hindus and Muslims.

A stone grinder (Chakki), which is traditionally used to grind wheat, is installed five/six days before the marriage in the house of both the bride and the groom. This ceremony starts off the wedding celebrations.

This is a fun Sindhi ceremony performed by the groom’s family where they invite women friends and neighbors for a night of music, song, dance and fun. Lada follows Dev Bithana.

One day before the wedding the bride’s priest visits the groom’s house with rice, nine dates, coconut, 21 sweet nibatas (sugar candy bars), sugar, Spices (cloves, cardamom) and green silk yarn. A lord Ganesh puja is performed. The time of the wedding is formally fixed. The groom is also presented a crown.

One day before the Sindhi wedding this ceremony is separately carried out in the bride’s and groom’s house. An anklet is tied on the bride’s and groom’s right leg. Seven married women pour oil on the groom and bride’s head and the two of them attempt to break an earthen pot. The shoes used to break the earthen pot have to be worn on the day of the marriage. At the end of the ceremony the clothes are torn to symbolize a break from the past and to ward off evil.

This Sindhi marriage ceremony is common to most North Indian weddings where decorative and intricate Mehndi is applied to the bride and female relatives of the bride. The entire family has a party.

This is another Sindhi wedding custom that is common to most North Indian weddings. This is a fun get together of the bride and groom’s families and close friends. Sangeet means song, and the primary objective of this ceremony is to sing, dance and have a great time. Unlike the formal wedding ceremony, this is an opportunity for both sides to get to know each other better and to let their hair down and have fun.

This is a puja that is performed simultaneously at the bride and groom’s houses. This puja revolves around a pot of water which is worshiped.

This puja is first done in the groom’s house and then the bride’s. Hindu Gods and the planets in the solar system, which influence destiny, are worshipped.

On the day of the wedding, Haldi (Turmeric) paste and oil is applied to both the bride and groom. Haldi/Turmeric is an antiseptic which makes the skin fair. Post this wedding day ceremony, the couple cannot leave their respective houses.

A holy red thread is tied to the wrist of the groom and bride.

The groom and his entourage is called the Baraat. Before leaving for the venue for the marriage, the groom’s mother prays to the Gods and the Baraat sets out. The groom usually travels on a horse that is decorated for this occasion. On his turban, the groom wears a Sehra (veil) to ward off the evil eye. The Baraat is accompanied by a band and this is an opportunity for the groom’s wedding party to dance and enjoy the start of the wedding proceedings.

This is the formal welcome by the bride’s parents of the groom and his family members. Usually the male members from each side of the family introduce themselves; for example the groom’s brother introduces and embraces the bride’s brother, etc. The bride comes out to welcome her future husband and he places his foot on hers.

The bride and groom face each other and exchange garlands.

The groom carries a white cloth that is tied to a red cloth that is carried by the bride. Both their right hands are tied with a holy red thread.

Since a Sindhi wedding is based on vedic traditions, a holy fire (Yagna) is lit. Prayers are first offered to Lord Ganesha, the Hindu God of prosperity and good luck. The priest reads mantras from Holy Scriptures which invoke Lord Ganesha, Goddess Laxmi (Goddess of wealth) and 64 other Goddesses to bless the bride and groom. The next step is the Pheras where the groom and bride walk around the holy yagna and make promises to each other. Unlike other Hindu weddings which have seven pheras, the Sindhi marriage has only four pheras. The groom leads the first three Pheras and the bride leads the fourth Phera. The Pheras are at the heart of the Sindhi wedding custom.

In this ceremony, the father of the bride hands over his daughter to her husband. The bride’s father pours holy water in the hands of his son-in-law.

This is the final ritual in a Sindhi wedding. The newly married couple places their right foot on seven piles of rice. After this they seek the blessings of the elders in the family by touching their feet.

The new bride’s feet are washed before she enters her husband’s house. The bride sprays milk in all the four corners of the house. She follows this by placing salt in her husband’s hand, who in turn hands it back to her. This ritual is done three times.

This Sindhi ritual is done the next day after the wedding. During the “Dev Bithana” ritual, a stone grinder (Chakki) was installed. This is now unveiled (Dev Uthana) by the priest. After prayers, the groom’s mother feeds the newlyweds seven mouthfuls of rice, milk and sugar.

This is the first visit by the newlyweds to the bride’s house.