Kundli is a Vedic astrological chart that graphically shows the position of nine planets across the houses, representing solar system. On the basis of exact time of one’s birth, planets are positioned in a Kundli.

Kundlis have an extremely important role in a person’s life according to Indian beliefs. The astrological charts in a Kundli help determine an individual’s personality like his/ her characteristic traits, etc. It is widely accepted that Kundlis are instrumental in predicting a person’s fate and this is why Indian matrimonylays huge emphasis on matching Kundlis. Kundli charts are generally used to fix Indian marriages as it is believed to indicate if the couple is suitable for matrimony or not. 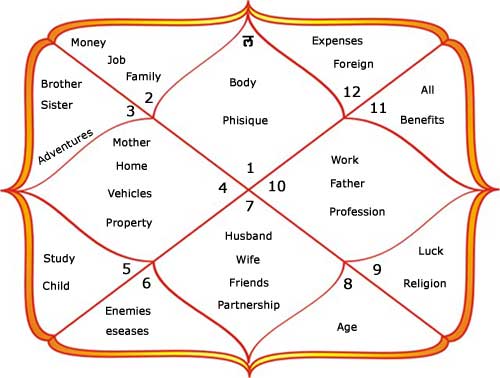 Kundali Matching is an ancient Vedic practice in which horoscopes of two people are matched in eight spheres of life. This is what forms the basis for determining if the two people are suited to tie the knot or get into matrimony. This requires full name of both the girl and the boy, gender, date of birth, time of birth and place of birth. In Indian culture, even before a marriage proposal is made, Kundlis of the prospective brideand groom are matched to see if their stars are compatible.

It is very important that a Kundli Chart is truthful and consistent. The details like time, place of birth, date of birth and other minor details should be exact. There should be no error in entering any of these details as even a small mistake can hugely impact interpretation of the Kundli.

Now-a-days, many online services for kundli charts are available though there is a possibility of difference in interpretation by different service providers.

Vedic astrologers are widely consulted for perfect interpretations but sometimes opinions of two astrologers may vary resulting in confusion and lesser degree of belief.

Kundlis are said to determine the favorable and unfavorable qualities of a person. Though the criteria for matching horoscopes vary from one religion to another, Manglik Dosha is considered the most infamous trait across all religions. India has a highly diverse cultural portfolio but the ill effects of this dosha share equal agreement between North Indian and South Indian astrologers.

Even if all other attributes in a Kundli match and there exists a manglik dosha, the marriage is considered inappropriate. It makes for an integral part in kundali matching as astrological compatibility can be achieved only in the absence of the dosha.

According to Vedic astrology, Manglik Dosha occurs when Mars is placed in 1st, 4th, 7th, 8th or 12th House, the Houses of happiness or mental peace, of marriage, of longevity and of expenditure. This condition is devastating for marriage according to astrology.

The effects of manglik dosha could be very unfortunate like difficulties in married life, constant quarrels between partners, divorce or even death of spouse. But Mangalik problem can be resolved or at least waned by either performing a puja or making the manglik wear a coral or getting the manglik married to a tree to absorb his/ her aggression.

Experts agree that trends have changed drastically and now it is only the parents of a couple who want to match the kundlis before finalizing the marriage.

Some people do not believe in Kundlis or kundali matching at all, calling it an unscientific idea but believing or not is subjective. There are still many who feel Kundalis are credible and should always be matched to fix a wedding.

Deepika Bansal writes on behalf of Jeevansathi.com, which is India’s fastest growing matrimonial website, provides online Indian matrimonial classified services. Jeevansathi.com enables users to create a Indian matrimony profile on the website and allow prospective grooms and brides to contact each other. Users can search for profiles through advanced search options on the website.