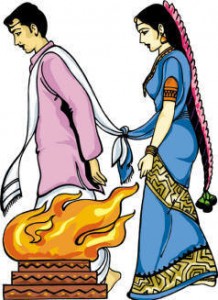 (for details on each of India’s 5 marriage laws, please click on the name of the Marriage Act mentioned below).

India is the birth place of major world religions of Hinduism, Buddhism, Sikhism and Jainism. Over the centuries, people of different religious faiths have made India their home. Christianity was brought to India by Thomas the Apostle in 52 AD. Islam arrived in India in the 12th century. The Parsees were persecuted in Persia and they were given refuge in India in the 10th century AD.

5] Special Marriage Act, 1954: This law covers Indian marriages between different communities, religions and for those who do not want to marry in a religious ceremony.

Except for Indian weddings conducted under auspices of the Muslim Marriage Act, all other Indian marriages have to be registered at the marriage registration office. Indian Muslim weddings too can be registered and it is advisable for official and legal purposes (inheritance, passport, visas, etc) that Muslim marriages are registered.

Couples marrying under the Hindu Marriage Act have to first conduct the religious marriage ceremony and then register the marriage. On the other hand, couples marrying under the Indian Special Marriage Act do not have to undergo a religious marriage ceremony. Under this act, couples planning to get married should give the marriage registration officer a 30 day notice period. The officer will put up a marriage notice for 30 days to give the opportunity to everyone to raise any objections. After the 30 days period, the couple can register their marriage. Under the Indian Special Marriage Act, the process of registration of the marriage is also the solemnization of the marriage.

Documents And Process For Marriage Registration In India