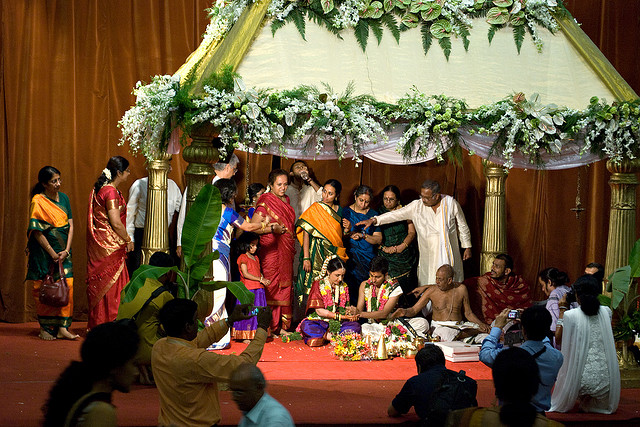 There is no such thing as a typical Indian wedding. Surprised? That’s because in this land of diverse languages and traditions, wedding customs are equally varied.

Here’s a look at how people residing in the eastern and western regions of India celebrate weddings.

Eastern Indian wedding ceremonies are not as opulent and extravagant as their North Indian counterparts but are equally elaborate in their own way. There are scores of simple but meaningful rituals, many of them very interesting and actually rooted in ancient logic and reasoning. Weddings in India are also an occasion where long-lost close friends and relatives bond and share memorable moments during this happy occasion.

The most striking feature of a Bengali wedding, however, is the fact that the groom’s mother does not attend the wedding! She awaits the happy couple at home, ready to perform all the welcoming rituals.

A typical East Indian groom is traditionally clad in dhoti and kurta, and he carries a mirror all the time right till wedding ceremony is over. The groom’s party is accorded a welcome with fresh flowers and much blowing of conches by the womenfolk. Rosewater is sprinkled on him and then both, the bride and the groom get ready for the actual nuptials. The bride is beautifully dressed in a heavy red Benarasi saree and wears a kind of a crown like a princess. She has sandalwood paste decorations on her forehead and face

As a part of the wedding ritual, the bride has to sit on a low wooden stool called pidi that is lifted by her brothers. The bride is then taken around the groom seven times in circles by her brothers, signifying their eternal union. Interestingly, all along she shields her eyes from the groom with a betel leaf. The bride then proceeds to sit on a highly decorated pidi (low wooden stools), similar to the one on which the groom is seated, all through the chanting of the priest. The women folk gathered blow conch shells to mark this highly auspicious moment.

This is followed by the exchange of flower garlands between the bride and groom, to the accompaniment of the chanting if scared mantras (Sanskrit verses). The bride and groom again take seven steps around the sacred fire. The groom then applies vermillion onto his bride’s head, the symbol of a married woman. After this, the bride is handed over to the groom by her maternal or paternal uncle.

The newlyweds reach the groom’s home where more rituals and ceremonies follow. Hiding the rings of the bride and groom, playing with a vessel full of rice are some of the wedding games to make the new bride feel at home.

Interestingly, the married couple has to stay separately that night and it is only the next night, after all the rituals have finally been completed that they can enjoy conjugal bliss!

Western Indian weddings, especially Maharashtrian weddings, usually take place in the morning. Prior to this, the engagement ceremony, known as Sakhar Puda (exchanging of a sugar packet) takes place to formally declare the betrothal.

In the morning, a puja is conducted to worship Lord Ganesh (the elephant-headed God of prosperity). The groom’s family arrives in the morning at either the bride’s residence or the mandap and is treated to a lavish breakfast.

After this, as per the auspicious time already set in consultation with various astrological almanacs, the girl’s maternal uncle escorts her to the Mandap (marriage hall). Tradition dictates that the girl and boy do not see each other while the Antarpaat ceremony takes place. In this a silk partition (Antarpaat) is placed between them. Then the shlokas are chanted by the priest after which Antarpaat is removed. The friends and relatives gathered shower unbroken rice on the couple as an auspicious sign. The bride and the groom then exchange flower garlands and take the Seven Steps (Saat Pheras) around the ceremonial holy fire.

After the marriage ceremony, another puja, known as Laxmi Narayan puja, is held, in which the bride and groom are symbolically worshipped as Goddess Lakshmi (the Goddess of Wealth) and Lord Narayan, respectively. Like in all Indian weddings, the girl is then formally ‘handed over’ to the groom by her father or maternal uncle. This ceremony is known as Kanya Daan all across India.

Gujarati wedding ceremonies also begin by offering prayers to Lord Ganesha and seeking his blessings. Traditionally, the bride and the groom exchange Jaimala or flower garlands twice. The first time round, the groom is made to sit on a higher platform than the bride, symbolizing that the bride has not broken his ties with his friends and family. The second time, they are at an equal level. In what is known as the Madhuparka ceremony, the groom’s feet are washed and he is plied with honey and milk. Even as this ceremony is in progress, the bride’s sisters and cousins attempt to steal the groom’s shoes, a tradition that is followed in almost all the Indian marriages. There is much laughter and good-natured teasing. The groom has to ‘bribe’ these girls with handsome financial benefits in order to get his footwear back!

Then comes the tying of the groom’s shawl to the bride’s sari, readying them to take the customary Seven Steps around the sacred fire – the central part of all Indian weddings. The couple walks seven times around the sacred fire, taking their seven vows, to the accompaniment of the mantras being chanted by the presiding priest. Formally married, the couple seeks the blessings of their parents and other elders. This concludes the wedding which is followed by a grand and lavish reception party.

Traditions and customs form the backbone of an Indian wedding. It is rich, colourful and vibrant, hiding a wealth of meaning in its many interesting and, sometimes perplexing, customs that have their roots in its ancient heritage.

Daya is a former journalist who writes extensively for the UK gift industry. Her forte is the fine art of gift giving to all the women in one’s life, as well as handling the tricky etiquette involved in romance and relationships on the web. See Daya’s best picks for anniversary presents for women that guarantee to thrill the fussiest of women. At wedding anniversary year presents, Daya offers valuable anniversary-related advice ranging from gifts to jewellery to romance.

Basic Elements of the Christian Matrimony