The Taj Mahal is the most famous mausoleum in the world that symbolizes the love of Shah Jahan’s for his wife Mumtaz Mahal. The white marble mausoleum is located on the banks of the river Yamuna in Agra, India.

The land where the Taj Mahal is built originally belonged to Maharajah Jai Singh. Shah Jahan exchanged this land with the king. Material from all over India and Asia was used. 28 precious/semi-precious stones were used in the Taj Mahal. The white marble was quarried in Makrana, Rajasthan, Crystal and Jade came from China, Torquoise from Tibet, Sapphire from Sri Lanka, Jasper was brought from Punjab. Over 20,000 skilled craftsmen and laborers worked on the Taj Mahal. 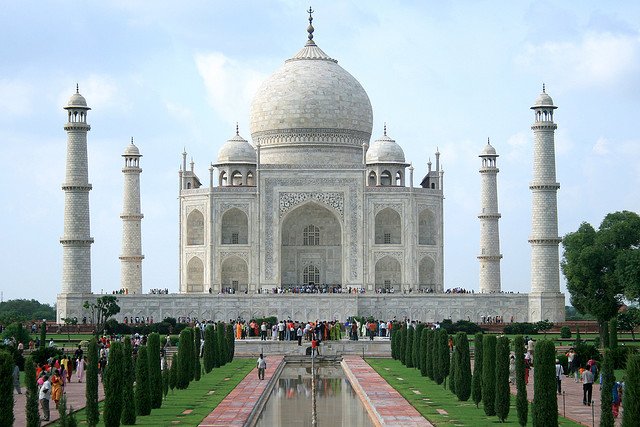 There was a strong and deep bond between Shah Jahan and Mumtaz Mahal. Mumtaz Mahal often accompanied Shah Jahan on his military campaigns. They had 14 children of which seven died during birth or young age. Mumtaz Mahal died in 1631, during the birth of their 14th child. Her death deeply affected Shah Jahan.

During Shah Jahan’s tenure, Mughal art and architecture was at its zenith. In addition to the Taj Mahal, other famous monuments constructed by Shah Jahan are Delhi’s Jama Masjid, Red Fort, Shalimar Gardens in Lahore, Lahore Fort and Jahangir’s mausoleum. Shah Jahan’s son, Aurangeb, over threw him in 1658 and kept him imprisoned for the next 8 years till his death in 1666.

Wedding Pictures And Wedding Announcement In The New York Times