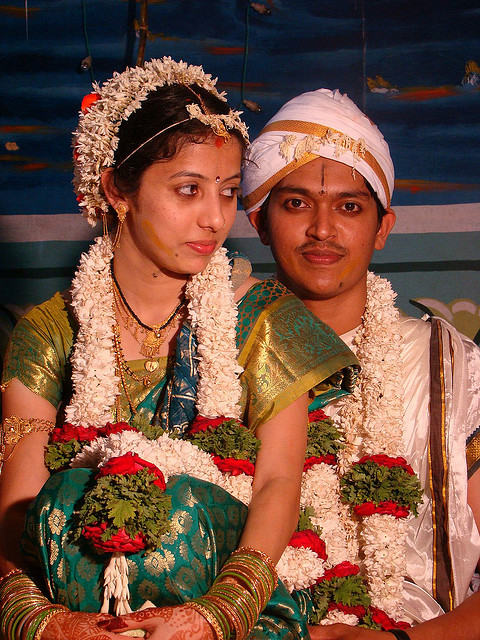 Indian weddings are easily among the most colourful, elaborate and lively in the world. Unlike the West, where it is the bride and the groom that are the prominent characters, in an India wedding, it is the immediate and extended families on both sides that are the star players! A wedding is a social affair, and heralds the coming together of not just the couple but of their families as well. So, it should come as no surprise that a majority of the youth comply with their family’s wishes even today and go in for arranged marriages.

A typical Indian wedding comprises of three broad segments – the pre-wedding ceremonies (which are almost as elaborate as the actual wedding itself), the wedding and some post-wedding rituals.

India is a vast and diverse country, with the North, South, East and West each having its own distinctive languages, cuisine, customs and traditions and wedding rituals.

A traditional North Indian wedding takes place at the brides’ home. North Indian marriages are characterized by several pre-wedding and post-wedding ceremonies. The most important pre-wedding ritual is that of the Mangni or Sagai (engagement ceremony). The boy and the girl exchange rings in the presence of a religious priest and family and close friends.

On the actual day of the wedding, the boy’s family sets off for the girls’ house in the evening amidst a lot of cheering, dancing and general merriment. The groom mounts a brightly adorned horse, usually with the youngest boy of the family sitting up front with him. He is preceded by a crowd of his male and female relatives, and friends, dressed in all their finery and accompanied by a musical band. His face is covered with a curtain of flowers (the sehra which is tied by his sister). The noisy, procession, with the band belting out the tunes of the latest Bollywood chartbusters, makes its leisurely way past residential houses, busy streets before finally arriving at the girl’s house.

The groom and his family are warmly received by the girl’s family, new members greet each other by exchanging garlands of flowers.

Finally, the groom and the bride, seated on a dais, get up to exchange garlands in the Jaimala ceremony – one of the most important of North Indian wedding traditions -amidst a lot of good-natured cheering.

The next part is the most symbolic one – the Saat Pheras (or the seven steps) that the bride and groom take around the ceremonial fire. Thus usually takes place very late – usually after 12 midnight – much after the guests have feasted and left and only the very close relatives on either side are left. Both of them circle the scared fire, taking vows to love and honour each other throughout their lives. The groom then applies a streak of vermilion to the bride’s head, after which they become lawfully wedded husband and wife.

The bride is then given a tearful send-off by her family as she leaves with her new husband to start a brand-new life.

The biggest difference between North Indian and South Indian weddings is that the latter takes place during the day instead of at night. The basis for the rituals is the same except that they are conducted in a different manner.

The wedding venue is usually a hall where the wedding mandap ( a small covered enclosure) has plantain trees tied to both the gateposts, overhead festoons made of mango leaves strung together, and Rangoli designs (intricate designs made with coloured powder) at the entrance.

The evening before the actual wedding day, the bridegroom is led in a flower-decked procession from a temple by the bride’s parents to the marriage Mandapam (hall). Once there, the formal espousal ceremony takes place. The elephant-headed god Ganapati, the God of Initiation, is invoked, and is entreated to keep away all obstacles away from the couple.

The ritual is followed by presenting clothes to the couple. Interestingly, the marriage ceremonies are performed separately by the bride and the groom.

The marriage ceremony is formalized in the hall by a Vedic priest who chants ancient hymns and verses, recalling the names of three generations of ancestors of both, the bride and the groom before all who have gathered to witness the wedding. The bride and the groom exchange garlands when they are lifted onto the shoulders of their respective uncles.

The bride then sits on her father’s lap for the ‘Kanyadan’ (giving away the daughter) ceremony to the bridegroom. The bride is presented with a Mangalsutra (the scared necklace that signifies her married status) as well as a new sari which is draped around her by the sister of the bridegroom.

After this, the groom walks seven steps with his bride, holding her hand in his. The seven steps are the most important part of the wedding ceremony.

The wedding is followed by an elaborate and delectable wedding feast, usually vegetarian.

Former journalist Daya brings her considerable creative writing expertise to the UK gift industry. Her forte is the fine art of gift giving to all the women in one’s life, as well as handling the tricky etiquette involved in romance and relationships on the web. Find Daya’s best picks for ladies anniversary gifts that help you crack the gift giving mystery! At customary anniversary year gifts, Daya offers valuable anniversary-related advice ranging from gifts to jewellery to romance.